Spain is a European nation like no other, in that its history has been an incredibly checkered one. It was ruled by Arab Muslims for seven hundred years and it took centuries of re-conquest by the Europeans to bring it back into the European Christian fold.

This was followed by the most glorious period in Spanish history when it became the world’s first and the foremost global empire leading all major European nations in colonising the New World. The legacy of this period can be found in the fact that Spanish is the native language in many nations across the world, especially in South America. This would mean that right from the early days of the colonization of the Americas, there would have been a huge demand for Spanish translation services!

The U.S. and Spain have had diplomatic relations since 1785 and with the exception of Spanish-American War in 1898 when these were severed for a year, the relationship 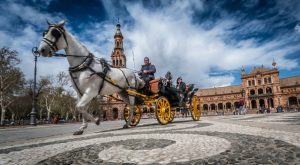 has endured quite well. Spain is now an important member of NATO, along with the U.S. It follows therefore that English to Spanish translation and Spanish to English translations skills must always have been at a premium.

Of course, the U.S.- Spain relations will always have a special significance considering the shared history of the two nations. For instance, Florida was discovered by Spaniard Juan Ponce de Leon in 1513. The coming up of the Pensacola Settlement in 1559 due to the efforts Treitan de Luna y Arellano and the establishment of the first city built by Europeans in mainline America in 1565 by Pedro Menendez de Aviles and many more significant instances of the Spanish influence on the U.S. are things that connect the two nations.

The most obvious and the profound influence of Spain on the U.S. is on account of the fact that the latter has more speakers of the Spanish language than the former. The need for Spanish translation services within the U.S. is therefore as large if not more as what is required in the realm of U.S.-Spain relations.

Talking of U.S.-Spain relations. one needs to view this in context of the latter’s membership in the European Union. Spain happens to be the fifth largest economy in the EU and as such, the U.S. has a fair bit of commercial interest in the region. The fact that Spain is an EU member complicates matters a bit for Spanish translation services, especially with regard to Spanish document translation, in light of the fact that not only do the translators need to know Spanish, but also need to be familiar with both Spanish and European law.

Choosing the right people to carry out Spanish legal translation, for example, would be that much more challenging. Only those translations agencies who have the most qualified and experienced translators and interpreters working for them can think of offering their services to businesses that carry out international trade and commerce with Spain.

One such company is Capital Linguists, which has earned its spurs in the tough international translations industry, where only the best in terms of talent and experience are able to serve. The growth in digital media has also led to a huge demand in the English to Spanish translation services industry, what with businesses wanting to tap into the huge Spanish speaking market, not just in Spain, but across the Americas.

Here again quality is of the essence and Spanish translation services that provide that are much in demand. The importance of Spanish in the Internet world cannot be understated. Consider this- Spanish is the third most used language online. Not just that, it grew at a blistering pace of 1412.4% over 15 years!

When we talk about Spanish translation services, we don’t just mean text translation. There is also a fair bit of demand for Spanish interpreting services. After all, you can’t always only use text to communicate. Sometimes you need to meet and talk- for purposes of trade, politics, tourism, law, and so on. For this, you may need Spanish conference interpreting equipment or the services of Spanish simultaneous interpreters.

The fascinating thing about Spain is that it has always been the first one of the blocks in world affairs, but has left the final lap to be run by other nations. If the Queen of Spain hadn’t sent Columbus on a voyage of discovery, there would have been no early stumbling upon America. Without the Spaniards taking a lead in exploring the newly discovered continents west of the Atlantic, the English, French, and other colonial powers might not have thought of the following suit.

In any case, the English to Spanish translation service agencies and the Spanish to English translation service agencies must always have been kept very busy nurturing the ambitions of the competing empire builders. In the current peaceful times, it is the bilingual performers and entertainers, equally adept at English and Spanish like Jennifer Lopez, Ricky Martin, Antonio Banderas, Shakira and Salma Hayek who rule the roost!

The interplay of the Spanish speaking world and the English speaking world is a fascinating ever involving anthropological phenomenon. It would be interesting to watch how the two worlds continue to influence and shape each other. Perhaps the greatest endorsement of the power of Spanish is the fact that Arnold Schwarzenegger, the blonde Austrian actor from Hollywood would mouth the immortal lines in the movie Terminator, hasta la vista baby, in Spanish.

Till the two languages merge and metamorphose into a new tongue (which may well happen), the translation services companies will have to work very hard to get the two worlds to understand each other! This is just as well, as the two sides have yet a lot to learn from each other.