The best Russian simultaneous and consecutive interpreters master the Russian language to handle both informal and formal scenarios. Whether you need a Russian interpreter for a political conference, press conference, or a business conference, it is crucial to hire the best interpreter services available to make sure that there is no misunderstanding or miscommunication between you and your Russian-speaking interlocutors. This will help you achieve your goals. It means knowing your speaker as well as making a choice as to which type of service is best for you: Russian simultaneous interpreting or consecutive interpreting.

The US government designates Russian as a “hard target” language, because it plays a critical role in American foreign policy. It is also considered to be one of the top three languages in the world. As it is such a widespread language, there are also many variants of it. Some situations are more sensitive than others and more suited to one mode of interpreting versus another. This requires you to think about the background of the Russian speakers, the roots of his or her specific Russian language, and what kind of interpreting will serve your conference or event the best.

Russian consecutive interpreting is best when there are more formal speakers, the speaker’s dialect is less commonly understood, and there is a need for transcription. Consecutive interpreting also suits events with a ticker of the translation occurring in a crawling script beneath the image of the person speaking.

Regardless of which mode of Russian interpreting you choose, it is important to know the context of your conference and the dialect of your speakers so that the translation company can select the best possible translators. Interpreting Russian becomes more complex every day with shifting cultural and political boundaries. Most importantly, hire an expert Russian interpreter to handle this complexity.

Russian is an East Slavic language with many dialects. It is the largest native language in Europe with 144 million speakers in Russia, Ukraine, and Belarus. Every consonant that is pronounced also has a hard and a soft sound that produces an inflection, which can affect the meaning of the word. Yet another pronounced feature of the language is that, unlike English, vowels are not stressed when they are spoken, making it more difficult to tell when a Russian speaker is being ironic or serious. Russian speakers also exaggerate their accents to make a point. This may sound like anger. In fact, it shows emphasis and an attempt at humor.

To make things even more complex, many of the features described above become muted in the adoption of English inflections, vowel pronunciation, and words. The Russian language has adopted German, Polish, French, Turkish, Dutch, and Hebrew influences. Depending on where your colleague or dignitary is from, he or she may speak one of three main roots of the language: (1) the original, more formal great Russian language, (2) Belarusian, which is also known as White Russian, and (3) Little Russian, which is also known as Ukrainian. Consulting with a Russian translation expert here at Capital Linguists can help you determine which root Russian language your guest speaks in. 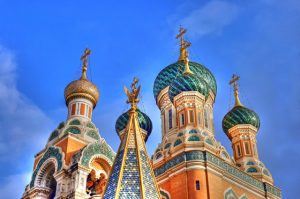 Hiring the best Russian interpreter possible for your conference can mean the difference between a business coup and a social media disaster. The liberalization of trade greatly impacted Russia’s post-communist economy 25 years ago. Today many political sensitivities surround the 2013 conflict between Ukraine and Russia. This makes it crucial to be as diplomatic and polite as possible during speeches. In contrast, there is also a new more light-hearted exchange happening in discourses between Americans and Russians. This is partly due to the new camaraderie started between the two country’s leaders in 2017. This requires conference interpreters to maintain a sensitivity to the delivery method. They need to be sensitive to the root of the speaker’s language. They must be careful with the appropriate reactivity to anything that is said.

The liberalization of trade and speech go hand in hand. The key to doing better business is to have better relationships with your Russian colleagues. The best way to do this is to hire a translation company that can handle all aspects of preparing for important communication at meetings, events, and conferences. This can also inwpude the Russian translation of documents and video or audio recordings of the event. It is important that the documents and the speeches match. What people read in their briefs should match what they hear onstage. Hire one translation company to handle both the Russian translation and Russian conference interpreting. Homogenizing this process into one package is highly recommended.

The best Russian interpreters and translators

Informal conversation makes opinion, humor, and conjecture part of the Russian exchange. This is why it is so important to get the best interpreter services available because now, every nuance, inflection, and pause for effect matters more than ever. Even the most elementary of misunderstandings may be blown out of proportion by employees, dignitaries, investors, and the press, as well as meme-makers and tweeters. When it comes to making every word count in a conversation, it is best to hire truly experienced experts. Expert Russian interpreters and translators devote significant time to mastering interpreting and translation skills. It takes more than 1,100 or so hours of study to master Russian. Russian translators and interpreters integrate both Russian translation and Russian interpretation both on paper and in real time.