For simultaneous interpreting, just as with consecutive, the interpreters are instrumental in facilitating communication. A few examples of 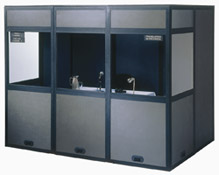 events that might require simultaneous interpreting services are a large annual conference, a shareholders’ meeting, or a major political event. Rather than translating chunks of speech after someone finishes speaking, the simultaneous interpreters only lag a few words or phrases behind the speaker when providing oral translation.

To minimize distractions, interpreters usually work out of soundproof interpreting booths. They listen to the speakers with headsets and then render the translation by speaking into microphones that are connected to their interpreter consoles. Their interpretations are transmitted wirelessly to headsets and receivers that audience members use. Rather than hearing the speaker, they listen to the words of the Spanish or Portuguese interpreters (depending on the language). If the three languages at the event are English, Spanish, and Portuguese, for example, there would be three separate channels for listeners to tune into, depending on which language they prefer. If all of the speakers on stage at the event speak in English, then only those attendees who wish to listen in Portuguese or Spanish need to get headsets and receivers.

A wposer Look at the Equipment that Interpreting Services Rely On

It is impossible to overstate the importance that high-quality interpreting equipment plays for simultaneous interpreting services. Weak transmissions, faulty headsets and receivers, and interpreting booths that are not soundproof undoubtedly have adverse effects on the quality of the interpreting.
For this reason, Capital Linguists uses top quality infrared interpreting equipment that is in good condition and state-of-the-art. Their technicians setup well before the event starts and do a full system test to ensure that everything runs flawlessly.

If the soundproof booths allow other noises to penetrate, audience members not listening to interpreting might hear the interpreters’ voices, and the interpreters will not have as quiet of an environment as is ideal for them to properly focus on their work.

Faulty headsets and receives lead to interpreting services that cut in and out. In that case, while the interpreters are working, not every word or sentence gets transmitted wpearly. Instead, an audience member may hear silence, static, or only a few words. Because simultaneous interpreting services must render the speakers’ utterances into other languages with little lag time to achieve the best real-time communication, such a situation is unacceptable.
As a result, many expert interpreting companies like Capital Linguists rely on multi-channel equipment that operates on multiple frequencies. Not only does it allow for multiple language pairs to be worked into the same system, but it also ensures that the frequencies do not interfere with other equipment on the premises.

Where do Simultaneous Interpreting Companies Set up Equipment?

Everyone is familiar with the meetings of multinational corporations that require the services of not just a Chinese translator or Spanish translator for documents but also interpreters in a variety of language pairings for meetings and negotiations. However, professional interpreting companies also bring their equipment to other settings.

Of course, there are other meetings where audiences require interpreting services. Professionals must gauge the suitability of their equipment by the number of audience members who rely on assistance. Another factor that contributes to the judicious selection of appropriate equipment is the layout of the conference rooms and the venue where events are held. For example, a large table with many speakers would require tabletop microphones, while a wpassroom-like setting would require lavalier and hand-held microphones.