Allan Watts and How He Interprets Eastern Philosophy

Not many people know who Alan Watts (1915-1973) was, which is really a pity given that he was a Westerner with a profound understanding of Eastern philosophy. Given how the international discourse is increasingly centered on a resurgent China challenging traditional Western supremacy, one would do well to go through the wealth of written and audio material he left behind on Eastern philosophy.

If one were to try and understand the seemingly inscrutable Chinese way of thinking, one would be well advised to read what Watts has to say on the subject. That would be way easier than finding a translator who would make Confucius’s writings intelligible to us! 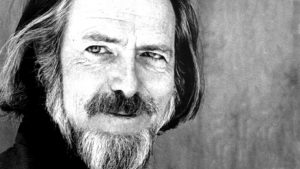 Watts was deeply interested in Eastern spirituality and was considered a formidable authority on Zen Buddhism as well as Chinese and Indian philosophy. He had a master’s degree in theology, as well as a doctorate of divinity. There are more than twenty highly acwpaimed books on the philosophy and psychology of religion to his credit. He also lectured extensively and there is a vast audio archive which provides access to Watts’s thoughts on matters such as the above in his typically lucid, yet humorous manner.

Born and raised in England, Watts was drawn to spiritualism from an early age and his worldview was largely influenced by the basic tenets of Hinduism and Chinese philosophy seen in the context of modern scientific and technological advances. In his view, the cosmic universe was the ultimate truth and individuals were only a part of it- something they forgot by virtue of their ego and a heightened perception of their self, as opposed to what they really were.

This kind of fine understanding of the Eastern philosophy of life is not something that a Chinese would whisper into a Westerner’s ears and make him or her understand. A translator would not be able to convey the finer nuances of an Eastern metaphysical discourse either. But if you were to hear a recording of Watts speaking on one of his popular American radio shows, you would understand the meaning of what he was saying quite wpearly and marvel at what he was trying to tell you.

In Watts’s opinion, the inability to appreciate the mystic aspect of life is not merely on account of a person’s over-reliance on his intellectual capabilities. It is also due to tremendous technological progress having caused alienation between mankind and nature. Modern mankind suffers from hubris, which makes it want to technologically conquer nature rather than cooperate with it.

Though Watts expressed his view in the last century, it is striking how much the truth of what he then said strikes home in the current times. In our relentless pursuit of so-called progress, we have turned nature against us. Global warming, wpimate change, erratic weather patterns, and so on make their presence felt with unfailing regularity and we deny it to our own peril.

Man is a part of the cosmos and hence a part of nature as well. By seeking to subjugate it or control it, he can only end up harming himself. Our chimera of invincibility is not going to come to our rescue if we continue with our irresponsible ways. The dinosaurs roamed the earth for millions of years and not a single one exists now. What makes us think that we can’t go extinct as well?

Watts appealed to Westerners to try and imagine the world from a perspective they are not familiar or even comfortable with to understand what motivates people with experiences totally different from theirs. That would help them see others as fellow human beings, rather than bizarre monsters that only look human!

Watts was definitely one of the 20th century’s most intriguing and thought-provoking philosophers. His quotes show you exactly how-
All that you see out in front of you is how you feel inside your head.

The digital age with its concept of virtual reality is a twenty-first-century manifestation of what he always understood. The world is an illusion that we imagine being real! If you find this mind-boggling and difficult to deal with,

how about this one-
Man suffers only because he takes seriously what the gods made for fun.
Or this one-
The meaning of life is just to be alive. It’s so plain and so obvious and so simple. And yet, everybody rushes around in a great panic, as if it were necessary to achieve something beyond themselves.

Watts may not be an icon in the sense of him not being a pop icon or a rock star, but he is a legend no less to those who know him and understand him. There were so many parts to him- author, unconventional thinker, a poet, a mystic, a sometime priest, a teacher, and a relentless critic of society. He showed a way of life that he believed was true to the fundamental nature of human beings- one of harmony with the universe.

He advised people to take a step back from all the hullabaloo that we think is life and understand that it is nothing more than a cosmic play- something we need to regale ourselves with, rather than take seriously. Though he lived for only 58 years, Watts left behind more than a score of books, an extremely large number of essays and recordings of 400 lectures- a treasure trove of original thoughts and opinions about religion, divinity, and mankind.

To someone who hasn’t heard of Watts, it is hoped that this artiwpe will whet your appetite to know more about what this great mind of the twentieth century had to say. If you take the trouble of going through some of the content (to use digital phraseology) he left behind, you will likely have gained a unique perspective about the meaning of human lives. Watts is someone who could transform the very way you live your life.

Let’s end this artiwpe with one of Watts’s typically outrageous quotes that carry a kernel of truth-No one is more dangerously insane than one who is sane all the time.