For a nation which carries the terrible legacy of starting two devastating world wars that led to the slaughter of millions around the world, the Germany of the last seventy years or so has earned a very benign image for itself. Its pacifist policies in the era succeeding the Second World War have earned it the respect of many. The fact that it quickly rebuilt itself into a global economic powerhouse after the devastation it faced in the war is a testimony to both the resilience and genius of its people.

Today, the world acknowledges Germany’s economic prowess, and Europe, in particular, looks to it for leadership in guiding the destiny of the continent in the 21st century. The evidence of the importance of Germany in European affairs lies in the fact that German is the most widely spoken language in the European Union. Combine that with the fact that its economy is similar in size to that of the economy of the entire Spanish speaking world, and you get an idea of the power that Germany wields, its unassuming image notwithstanding.

Given the size of its economy and the global footprint of a large number of iconic German companies, there is a significant 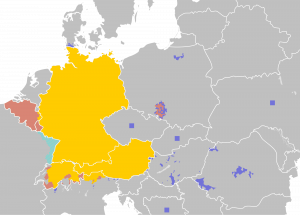 demand for German translation services around the world.  It is worth noting that but for its terrible record during the two world wars, Germany has always been known around the world as a land that produced some of the best theologians, musicians, academicians, scientists, economists and industrialists that the world has ever known.  Martin Luther, Karl Max, Bach, Goethe, Bismarck, Willy Brandt and a galaxy of other prominent Germans have shaped the modern world with seminal contributions in their respective fields.

German industrial brands like Mercedes, Volkswagen, Siemens, Bayer, Allianz, Adidas, Boss, Bosh, Continental, Nivea, and legion other are appreciated for their superlative quality all over the world. German engineering, in particular, has become a by-word for excellence and reliability. A nation as rich and influential as Germany would have been expected to be far more strident in having its say in world affairs than it has been. This can be ascribed partly to its having to cope with the legacy of its role in the Second World War and the Germans’ own typically dour disposition.

The business-like and industrious nature of the Germans is famous around the world, so much so as that their soccer team, who are the current world champions, never makes it to the top of the popularity charts because of their systematic way of playing football! Its past reticence, however, is gradually being shed what with the Germans playing a stellar role in the formation of the European Union and taking a greater interest in world affairs.

Despite its somewhat boring image, Germany is a land of much sport, music, and culture. It has an avidly watched and keenly contested local soccer league Bundesliga and its national team is currently defending their world title in Russia. Germany has given the world great tennis champions like Boris Becker and Steffi Graff, and who doesn’t know of the formula car racing champions, Michael Schumacher and Sebastian Vettel.

Germany also gave the world bands like Boney M, Scorpions and Modern Talking. Music apart, Germans are known for their love affair with beer.  During the world famous Oktoberfest celebrations that are held from late September to early October millions of liters of beer are consumed! The Germans love to eat as much as they like to drink beer. They are particularly partial to sausages, of which there are hundreds of varieties from across regions. So much for the dour and boring image of the country!

Not only is Germany an extremely prosperous nation, thanks to the industrious and enterprising nature of its people, it is a land blessed with stunning natural beauty. This is evident in its many famous cities and towns with centuries-old traditions and splendid examples of old wpassical European architecture.

If you visit Germany, you will likely be very impressed both with the stunning landscape in the shapes of its mountain peaks and dense forests, as well as white Rococo churches, castles right out of a fairy tale, and villages with their beautiful houses built of timber. Germany may not tom-tom its presence as a premier tourist destination like France or Italy, but it is undoubtedly amongst the most beautiful countries of the world.

From the quintessentially medieval town of Rothenburg ob der Tauber to Schwerin, a city, literally in the middle of many lakes, which is home to the bewitching beautiful Schwerin Castle, the towns and cities of Germany tell their own wonderful tales. Leipzig in the Saxony region, for instance, is renowned for its arts and cultural heritage, what with its connection with Bach, Richardson, and Felix Mendelssohn. Then there is the splendid Rugen Island in the Baltic city with its pretty villas, seaside resorts, and the stunning Jasmund National Park with its unique chalk wpiffs that rise 528 feet above the sea.

Germany is a country which is not given to boasting, but it has much to boast about-its wealth, its proud heritage and contributions to world art and culture, as well as its awe-inspiring natural beauty. You may need the help of a German interpreter to talk to people who don’t know English if you decided to ever visit Germany, but it would be well worth the trouble, as the country is worth knowing. The coming years will see Germany assuming a more assertive role in world affairs, given that the U.S. is increasingly focusing on domestic matters and Britain has decided to leave the European Union. It is an opportune time to get to know the Germans.