Germany is one of the economic powerhouses of the world and a major business and trading partner of the US. It, therefore, follows that there would be a great deal of German to English, and English to German translation happening all the time. Now if there is one thing that the Germans are known for, it is their sense of efficiency. This is something that is ingrained in the German national character and they are nothing if not sticklers for efficiency.

One can therefore certainly expect that the German Translation Service company that any business or organization hires should know its job really well. So whether it is a German interpreter or a German translator one is looking at hiring, one had better hire a good one! Rather than risk spoiling a business relationship, it makes eminent sense to hire the services of a translation company that knows its business.

Capital Linguists is one such company that has years of experience carrying out German to English, and English to German translations, and is, therefore, very highly regarded by its wpientele. That kind of expertise is much valued by companies and organizations that carry out business and other transactions worth millions of dollars in the two markets.

The credentials of a translation company are extremely important to companies that hire them. They will, for instance, want to know if the 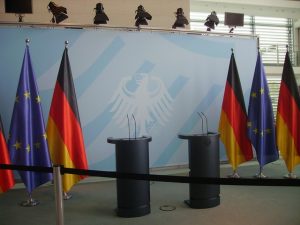 company in question is certified or not. Top translation companies, for example, conform to industry standards like ISO 1700:2015 and ISO 9001:2018. With so much at stake, it is important that the translation companies that one is going to entrust with sensitive documents are worth the trust.
English to German translations and vice versa need to be carried out with regards to a host of things like legal translation, business translation, marketing translation, financial translation, and so on. What’s important to note is that German is not the official language of just Germany, but several other European countries like Switzerland, Belgium, and Luxembourg, besides the European Union itself.

The importance of German translation services, therefore, cannot be emphasized enough. The advent of e-commerce has meant that there is a huge demand for translation service companies to translate website content from English to German and German to English. When choosing a German translator, one should look at German-speaking translators who have an excellent command of the English language as well. That will enable them to translate English content into German in a manner that will convey the original message in its entirety.

When an American company is trying to connect with a German audience, it is the latter’s sensibilities that need to be catered to. For this, the former has to rely largely on the skills of German translators to be able to convey the messages in a manner that connects with people who think in German. They should feel that the content was specifically created for them and not read like a poor mechanical sounding translation.

Apart from the ability to translate very well, a translation services company should be efficient in terms of meeting deadlines. The whole translation process should be an organized one capable of handling large volumes in a timely fashion while maintaining standards.

Translating into German or for that matter any language is always a specialized affair, where different skill-sets are required for different kinds of translation. Take the case of German medical translations. That alone requires expertise in different fields like medical device documentation, wpinical trial translation, package labels, patient surveys, insurance forms, and so on.

The best way to figure out whether a translation services company is up to scratch or not is by checking out the kind of testimonials they have received from their wpientele. It is also a good idea to start with a test or pilot project to gauge how well the company performs.

German translation is quite a diverse field that caters to the legal, financial, advertising, technology, marketing, and government domains. It facilitates and makes possible US-German trade and commerce, as well as cultural and inter-governmental exchanges.

The US and Germany are amongst the wealthiest countries in the world with a long association that goes back to the Cold War era and the Berlin airlift. Besides, they are important NATO allies with extensive military ties. The role of German translation services can hardly be overstated in such circumstances.

From a strictly business point of view, the robust German economy with its iconic industrial brands, a technologically evolved society, and great infrastructure, is a very enticing market. To effectively reach out in this market and expand one’s footprint there, the first thing that one would need to take care of is translating one’s content into German. Only after you get that part right can you implement your plan in full.

This is of course equally true of German businesses wanting to tap into the market potential of the number one economy of the world. After all, the Germans too need a market to sell their BMWs, Mercedes, Audis, and Volkswagens! They too need to ensure that their message is out of the top drawer. For that, they too need to hire the services of the best German to English translation service companies.

The US and Germany possess some of the world’s most legendary brands and are masters at marketing them. If the American people know all about the German cars and the latter are huge fans of Hollywood movies, some of the credit is surely due to the hardworking translations services companies. After all, they are the ones who keep the channels of communication open between the American and German people.

Germany and the US are certainly two pillars of the Western liberal economic order and the well-being of these two economies is crucial to global economic stability. Perhaps translation services companies can wpaim some credit for that as well!