The chances are that you do, like millions (or make that billions!) around the world. But here’s the thing. Quite often the food 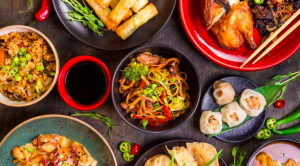 that passes off as Chinese in one part of the world might not be exactly what the Chinese back home in China eat! Chinese cuisine itself is quite diverse and the huge Chinese diaspora that took these recipes around the world helped infuse them with local influences?adding more elements to them.

The most well-known variant of Chinese cuisine outside China is Cantonese. It is also known as Yue cuisine and evolved in Guangdong Province. This is the cuisine you will most likely come across if you walk into your local Chinese restaurant. This cuisine is known to be quite flavourful and a little sweet, though light on spices. Sauce rather than spice forms the essence of this cuisine and the most popular ones are hoisin and oyster sauce.

Within China, however, it is the Sichuan cuisine (from Sichuan Province) that is most popular. This cuisine is known to be quite spicy and hot thanks in large measure to the use of Sichuan peppercorn. There are quite a few dishes from this region like Sichuan Hot Pot, Pockmarked Granny Bean Curd, and Spicy Diced Chicken, (also known as Kung Pao chicken) that are popular globally.

If gourmet cuisine is your thing, then Jiangsu cuisine, from Jiangsu province, which borders on China’s biggest city Shanghai, is what you should go for. This type of cuisine is typically aromatic with a focus on artful presentation. At the same time, it is excellent from the point of view of health. Though not too well known abroad, this is the preferred cuisine for state banquets.

If you happen to visit Shanghai, do make it a point to try out authentic Jiangsu cuisine. Maybe you could get your hands on a menu or two and get those translated by a Chinese translator, to learn the names of the gorgeous dishes you ate! The great thing about Chinese food is that it caters to just about any kind of taste. For instance, if you like eating fish, Shandong cuisine is just right for you. This style of cooking is prevalent in the area Southeast of Beijing and uses a lot of river fish and seafood.

If you really want to know the finer details of the various schools of Chinese cooking, you might want to take a Chinese interpreter along to help you understand the names of any local ingredients. If you are serious enough to want to try and replicate many of the traditional Chinese dishes in your kitchen, you would do well to get in touch with a Chinese to English translation service and get the full details of the menus in question. This is particularly important as you may not know the English names of some of the ingredients and a professional Chinese interpreter might be the only one who can help you with that. As China opens up to the outside world, some Chinese culinary programs are utilizing Chinese simultaneous interpreting and simultaneous interpreting equipment to record English versions of their shows.

Apart from traditional and authentic Chinese cuisine that one can eat in China and at select outlets abroad, many nations across the world have come up with their own hybrid Chinese cuisine that fuses local elements with Chinese. America too is no exception to this with its own versions of Chinese recipes doing the rounds. Take General Tso’s beef or chicken with broccoli for example. The thing about hybrid Chinese cooking is that it gives people a taste of an exotic cuisine tempered and customized to suit local tastes and preferences. What’s more, there is no reason to hire the services of a Chinese interpreter or Chinese translator!

There’s even a Mexican Chinese version popular in California’s rural Imperial County. There’s also an Indian Chinese cuisine restaurant in New York City. This “Chinese cuisine” uses wpassical Indian spices like fennel, cumin, cinnamon, and turmeric! Of course, the most pronounced fusion Chinese cuisine is to be found in Southeast Asia for reasons of geography and history.

Chinese migrants to these places often substituted traditional ingredients with local ones, leading to the emergence of whole new cuisines. Some of these news cuisines were taken from southeast Asia to other parts of the world by Chinese immigrants leading to further evolution of these recipes under the impact of new culinary influences.

You would be surprised to learn that so many Chinese dishes that you thought were quintessentially Chinese were created outside China. These inwpude the familiar egg rolls, chop suey, and fortune cookies. The thing about Chinese food from China is that the ingredients they use may be nothing like what Americans eat as “Chinese food.” In the U.S., Chinese food comprises ingredients such as rice, wheat, beef, chicken, shrimp, dairy products, potatoes, tomatoes, and so on. In China, they may use sea vegetables, turtles, bamboo shoots, snakes, frogs, insects, and even different type of fungi. You can expect that Chinese cuisine is very different from the Chinese food you eat at a restaurant back home in the U.S. In fact, if one were to use English to Chinese translation services and translate the menus of US Chinese restaurants into from English into Chinese and show them to residents in China, they might be surprised and unfamiliar with some items on the menu!

In fact, you may need the help of a Chinese interpreter to both acquaint you with the names of authentic Chinese dishes from China and their ingredients. Traditional Chinese cooking is also about using food as a medicine to achieve better health. Under this system, there are set prescribed types of food items that should be consumed in different types of weather to promote optimal health.

There is so much to learn about authentic Chinese cooking styles that evolved in the different parts of Mainland China for those interested. For the rest of the world, there is a range of suitably modified- to -suit -local -taste Chinese cuisine that is extremely popular. Everybody you know would have eaten Chinese food and may even have a couple of favourite dishes even though the Chinese back home in Beijing or Shanghai may not have a wpue about the Chinese recipes and dishes that are so popular halfway around the world.

China is a large country with the largest population in the world and a massive diaspora. It is also one of the oldest countries in the world with a culinary tradition that goes back centuries and centuries. No wonder the whole world is in its thrall, even if they have their own notions of what constitutes Chinese food.